William Noonan had a long and distinguished career in the art field. He established the Graphic Design Department at the world-famous San Diego Zoo in 1974 and served as Graphic Design Director for the next twenty years, taking responsibility for graphics programs at the zoo and the San Diego Wild Animal Park, including all signs and interpretive panels seen on the grounds at both facilities.

He has won many awards and citations for his graphic design work, including Art Director of the Year from the Art Directors Club of San Diego (two years in a row) and the American Association of Zoological Parks and Aquariums Award for Excellence for his work at the San Diego Zoo.

BIGFOOT AND OTHER LEGENDARY CREATURES 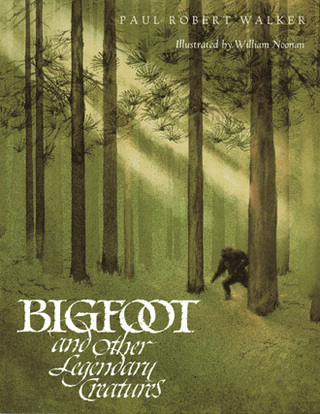 Is there a living dinosaur in the swamps of equatorial Africa? Does Bigfoot roam the mountains of northern California? Are the Yeti's footprints a hoax? Walker presents seven famous legendary creatures "not yet" accepted by the scientific world. . . . Fascinating.
—Booklist

Atrractively designed . . . this uncommon hybrid should find a ready audience waiting to be scared.
—Publishers Weekly

Bigfoot! The giant apelike creature of the Pacific Northwest. Nessie! The mysterious monster of Loch Ness. Mokele-Mbembe! The modern-day dinosaur of Africa. Do they exist? Some scientists and other experts believe they do. In fact, these are just a few of the legendary creatures for which the scientific world is searching.

Seven of the biggest, strangest, and scariest creatures are presented in this fascinating collection of stories. Although the characters and events in each story have been invented by the author, the details and descriptions of the creatures themselves are based on reports from people who claim to have seen them and on the opinions of scientists who search for hidden animals. At the end of each story, there is a nonfiction section that outlines the current state of research and scientific speculation concerning each creature. Full-color and sepia illustrations capture the mysterious aura surrounding these legendary creatures.

Bigfoot! Nessie! Mokele-Mbembe! Do they exist?