Voices from the Warriors

Last known photo of George Custer, taken in New York City in April 1876, two months before the battle. In his autobiography, Custer expressed genuine sympathy with the Indian way of life:

If I were an Indian...I would greatly prefer to cast my lot among those of my people who adhere to the free open plains, rather than submit to the confined limits of a reservation. 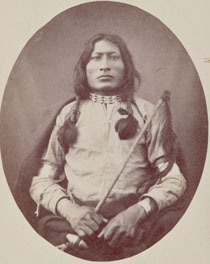 I was sitting in my teepee combing my hair...I saw a man named Fat Bear come running into camp and he said soldiers were coming on the other side of the river...We could hear lots of shooting. I went to [the] teepee of my uncle, Sitting Bull, and said I was going to take part in the battle. 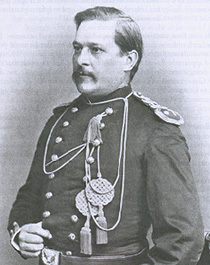 I deployed and...charged down the valley...I however soon saw that I was being drawn into some trap...I could not see Custer or any other support and at the same time the very earth seemed to grow Indians and they were running toward me in swarms and from all directions. 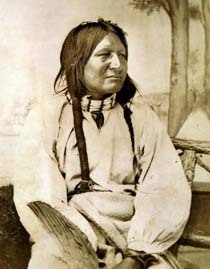 Two Moon, Cheyenne chief, describing the scene as the doomed soldiers depserately defended themelves on Custer Hill toward the end of the battle:

Then the shooting was quick, quick. Pop—pop—pop very fast. Some of the soldiers were down on their knees, some standing. Officers all in front. The smoke was like a great cloud, and everywhere the Sioux went the dust rose like smoke. We circled all around them—swirling like water round a stone. We shoot, we ride fast, we shoot again. Soldiers drop, and horses fall on them. 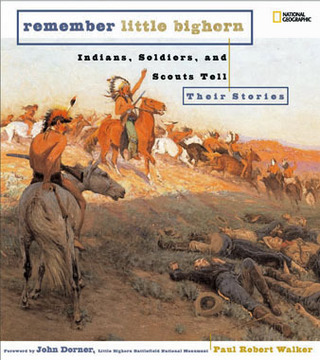 
Drawing extensively from and making sound use of primary-source materials, this authoritative reconstruction of the battle recounts the course of events. Beginning with the white incursion into the Black Hills in the summer of 1874 and the discovery of gold, the narrative chronicles mounting tensions as the U.S. government increased demands that the land be surrendered. The text covers the course of the warfare beginning in March 1876, and continues to the Battle of the Rosebud, thus setting the stage for June 25, 1876. The Battle of Little Bighorn is laid out in detail, using maps to indicate troop movements and testimony of both Native Americans and army troops. The treatment is evenhanded, not faulting Custer as a madman (his decisions were not unreasonable, given his lack of experience), but also presenting a clear and sympathetic case for the Indians' defense of the Black Hills. Beautifully laid out with numerous period photographs of the people quoted in the text, as well as period drawings, paintings, and reproductions, this exemplary historical account creates a vivid picture of a time, place, and event. More detailed and immediate than R. Conrad Stein's The Battle of the Little Bighorn (Children's Press, 1997), this is a superb addition to most collections.

Booklist, October 2006
In dense detail that draws on a wide variety of primary documents, including eyewitness accounts from all sides, this handsome volume gives an almost blow-by-blow account of the famous battle that came to be known as Custer’s Last Stand. ... Walker’s exhaustive research [brings] together the conflicting viewpoints of the whites and the Lakota Sioux, Cheyenne, and Arapaho fighters, documenting everything in source notes. The handsome book design, with thick paper, clear type, maps, stirring photos, and archival images, will attract readers to the battle story and then start them thinking about lasting historical issues.

“Hold your horses in, boys; there are plenty of them down there for all of us.”

This would be one of the last orders issued by George Armstrong Custer. His cocky attitude reflects his grave misjudgment of the Indians' determination to hold onto their lands. Before the afternoon was over, he and all of the 200-plus men under his immediate command would lie dead on a bloody battlefield along Montana’s Little Bighorn River. Oddly, Custer’s defeat made him a legend. He was immortalized in books, paintings, and motion pictures, standing in the midst of battle, blonde hair flowing and pistols blazing. White Americans called the battle a massacre and labeled the Indians “savages” who celebrated their victory with “scalp dances” and bonfires.

To find the answer, author Paul Robert Walker has sifted through scores of eyewitness accounts from the Lakota and Cheyenne who fought at the Little Bighorn, from Custer’s Crow and Arikara scouts, and from surviving soldiers of Custer’s 7th Cavalry, who observed the battle fought from a distance and later buried the dead. He rode though the battlefield on horseback to get a feel for the troop movements and strategies, examined the latest archaeological evidence, talked to descendants of Crazy Horse, Sitting Bull, and one of Custer’s Crow scouts, and consulted with the battlefield’s chief historian. By weaving together the historical evidence and the eyewitness accounts of Indians, soldiers, and scouts, Walker creates a riveting narrative that allows readers to experience for themselves what really happened on that June afternoon at the Little Bighorn.