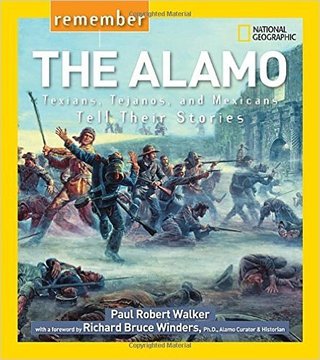 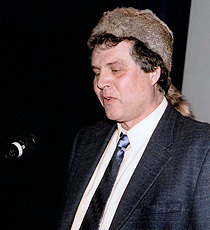 I wore a coat and tie to the historical dinner of the DRT convention in Tyler, Texas (May 2008), where I was presented with the Naylor Award. When I was called onstage, I pulled out this authentic coonskin cap that I bought at the Fort Bridger trading post in Wyoming during one of my research trips for National Geographic. The Texas folks loved it, and I loved them. 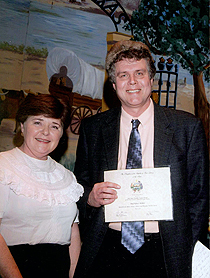 Posing with my Naylor Award certificate with the lovely Nancy Marion, DRT Library Committee Chairman. Although my tight smile looks like I have a wagon wheel stuck in some strange part of my anatomy, I was actually having a great time. Don't mess with Texas!

REMEMBER THE ALAMO: Texians, Tejanos, and Mexicans Tell Their Stories 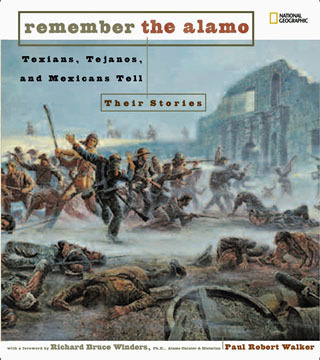 School Library Journal • August 2007
Walker presents a concise account of the complex events leading up to the Battle of the Alamo starting with June 1835, when Texas was still part of Mexico. He focuses specifically on the various people involved and why they were fighting. The deceptively short five chapters are chock-full of quotes and firsthand accounts of various Tejanos (Mexican-born Texans) and Texians (U.S.- or European-born Texans) explaining why they did or did not want freedom from Mexico. Likewise, the Mexican perspective is included. Handsome and colorful glossy pages include abundant full-color and black-and-white period paintings, maps, and small portraits of important figures. An in-depth time line of Texas and the American Southwest (1528–1853) is included, as are postscripts on key figures involved in the battle. Like most books on the Alamo, this one is arranged chronologically, thus the perspectives of particular people are interwoven within the overall story rather than by group. . . . carefully written and meticulously researched.

Booklist • May 2007
Walker offers a detailed account of one of this country’s most famous last stands. Opening with clear context about why tensions between Texas residents and the Mexican government were brought to a head, the book then chronicles events directly leading to the siege of the Alamo and its immediate aftermath, following up with an epilogue on the decisive battle of San Jacinto 10 months later. Bringing the history to life is a healthy selection of dramatic, modern paintings along with plenty of archival drawings, maps, and old photos. Back matter includes resource lists, biographical postscripts on notable Alamo survivors, and several time lines. . . . students of the conflict will welcome the attractively presented information.

“I call on you in the name of Liberty, of patriotism, & every thing dear to the American character, to come to our aid…”
—Colonel William Barret Travis

It was a desperate plea from a desperate commander. A small group of reinforcements did arrive, but not enough to make a difference. The deaths of William Travis, Jim Bowie, Davy Crockett, and some 200 other defenders of the Alamo at the hands of Santa Anna’s Mexican Army would give rise to one of the most legendary battle cries in American history: Remember the Alamo!

The story has been told countless times in everything from comic books to feature films. Always it is the brave Americans fighting the overwhelming forces of a cruel dictator for the right to live in a Texas independent of Mexican rule. Too often, little mention is made of the Tejanos — Mexican Texans — who were willing to put their lives on the line to fight alongside the other defenders at the Alamo. Tejanos and Anglo “Texians” alike were Mexican citizens and those who signed the Texas Declaration of Independence were as guilty of treason as the Founding Fathers who signed America’s Declaration of Independence.

And what about Santa Anna? Was he so wrong in resisting a rebellion by his citizens and wanting to keep Americans from taking over his country? Clearly, there is much more to the story than legend reveals.

Paul Robert Walker has studied the evidence — messages sent out from the Alamo before the battle, reports written by Tejano and Texian leaders, eyewitness accounts from a slave and a handful of women and children who were spared by Santa Anna, and stories told by Mexican officers and soldiers. He has consulted with experts, examined the historical sites, and read the most recent scholarly theories to present the story of the Alamo through the eyes of Texians, Tejanos, and Mexicans as you’ve never heard it before.