We were now about to penetrate a country at least two thousand miles in width, on which the foot of civillized man had never trodden.
—Meriwether Lewis, 1805

The way looks pleasant nothwitstanding we are so near encountering the difficulties of an unheard of journey for females.
—Narcissa Whitman, 1836

I want to know what you are doing on this road. You scare all the buffalo away. I want to hunt in this place. I want you to turn back from here. If you don’t, I will fight you again. . . .
I am your friend,
—Sitting Bull, 1876

TRUE TALES OF THE WILD WEST 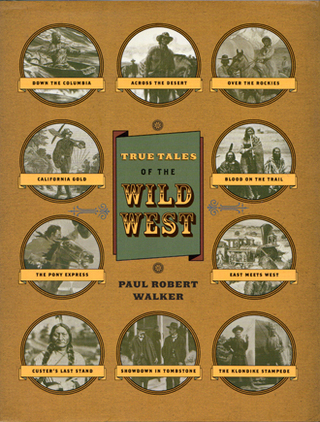 Skookum Jim, Big Nose Kate and Man-Afraid-of-His-Horses are names that could only belong to one place in time: the Wild West.

The era of westward expansion gave rise to a host of legendary characters and stories. In True Tales of the Wild West Paul Robert Walker shares ten of these stories to present a delightfully readable and entertaining history of the West, from Lewis and Clark’s descent of the Columbia River in 1805 to the Klondike Stampede in 1898. Along the way you’ll learn how a dead cow touched off 25 years of warfare between the U.S. Army and the Indians, see rugged mountain men line up for Bibles just to get a glimpse of Narcissa Whitman, discover that the shootout between the Earps and the Clantons did not take place in the O.K. Corral, and find out why bands played, cannons boomed, and bells rang in San Francisco two days before the transcontinental railroad was completed.

Walker combines his storytelling and research skills to bring each of these legendary characters and events to life. He has visited the sites, consulted with experts, and meticulously studied letters, journals, newspaper articles, and legal testimonies to peel away the myth from the legends and bring you True Tales of the Wild West.