Other Titles in the All About America series

Gold Rush and Riches
A Nation of Immigrants

By Other Authors
• Explorers, Trappers, and Pioneers
• Colonists and Independence
• Wagon Trains and Settlers
• Stagecoaches and Railroads
• The Civil War
• Cowboys and the Wild West
• The Industrial Revolution 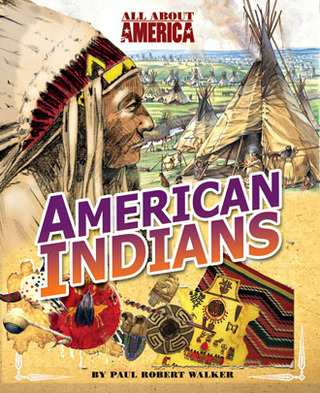 Long before the First Europeans arrived, North America was home to variety of native peoples, with cultures as diverse as the landscapes they inhabited. American Indians introduces you to the tribes of each region, from the Iroquois of the East to the Sioux of the Plains and the Navajo of the Southwest. Look inside a pueblo, join a buffalo hunt—and witness the conflicts that erupted as the westward expansion of the United States threatened the tribes' ancient ways of life.

The books in the All about America series pack a wealth of information into an attractively designed package. Double-page spreads, enhanced with photographs, color illustrations, reproductions, artifacts, maps, and sidebars, introduce each topic in detail. . . . All titles give careful consideration to Native American history, highlighting their displacement, noting that colonists and Indians often attacked each other, and emphasizing that more settlers died of disease than from attacks. A glossary, time line, and suggested books and websites add to this series’ research value. - Booklist