This book is still available directly from National Geographic, in both the regular edition and deluxe leather-bound edition. Call the NGS Book Division order line: 1-888-647-6733. 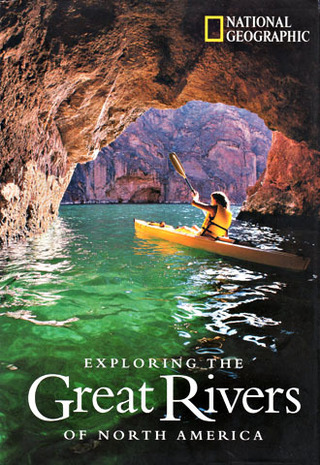 The greatest rivers flow through time as well as through a land. Some, like the grand Mississippi, possess overwhelming scale; others seize our imagination with wild and dramatic beauty, like the Colorado as it churns through the Grand Canyon on its way toward the sea. What all share is the power to shape human history as surely and inexorably as they have carved their channels across the continent.

In this era of superhighways, it's easy to forget the vital role rivers played in the opening of America, helping explorers like Cartier and Lewis and Clark penetrate the continent's expansive wildernesses. Rivers also nourished the burgeoning towns and cities, of course, providing trade routes, power, and irrigation and supplying human residents with livelihoods as well as recreational opportunities.

This fascinating group portrait presents a dozen key rivers, each with a magic all its own. The sedate James recalls our founding fathers and the clashing armies of the Civil War; the Missouri and the Mississippi summon up images of the American heartland and the Wild West. The Columbia flashes with spawning salmon, while the Sacramento and the Yukon sparkle with gold-rush memories. Lavishly illustrated with more than 120 photographs and historical art, this engrossing and informative book sweeps from the Atlantic to the Pacific, from the Gulf of Mexico to the Arctic Ocean, weaving a wonderful tapestry that captures both the natural magnificence and the human history of North America's waterways.