TRAIL OF THE WILD WEST: A Reexamination of the American Frontier 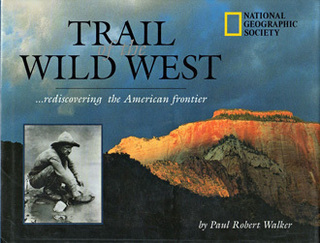 There, upon the rock, about six inches beneath the surface of the water, I discovered the gold. I was entirely alone at the time.
—James Marshall, 1848

Marshall's discovery at Sutter's Mill sparked a half-century of the most explosive growth any nation has ever known, an era of unparalleled excitement and adventure that has come to define the American spirit at its most vibrant. It was a time when a few larger-than-life figures rode into immortality—and countless ordinary men and women braved the hardships of the frontier in search of a golden future.

Trail of the Wild West re-creates this colorful period in all its vivid variety, from the legendary desperadoes, soldiers, and Indian leaders, whose enduring myths often stray far from the truth, to the "little people" whose diaries and letters record a plainer yet more poignant reality. Through their eyes, we witness the gold strikes, the gunfights, the range wars, the Indian battles, the race to build a transcontinental railroad, and much more—a story whose matter-of-fact details and unvarnished observations are every bit as fascinating as the tall tales so familiar to us all.

Drawn from contemporary documents and captured in vintage photographs, these anecdotes and images paint a vivid picture of frontier life as it really was. Evocative archival material is just one of many delights to be found in this lavish volume. As you meet the trail blazers who plunged into the unknown, you'll see the dazzling and monumental landscape as they saw it—not in the sepia tones of old daguerreotypes, but in dozens of spectacular full-color images by some of today's finest photographers. It's a stunning panorama of unspoiled majesty that still arouses the same awe and amazement felt by the prospectors, scouts, and settlers who first beheld it.